IN PRACTICE: The devices were varied and there were different quirks regarding access to the hotel’s internet. But the majority of players had more than one device at their disposal, and by the end of the weekend all players who wished to, knew how to view rankings and scorecards.

BEST PRACTICE: Event organisers who confirm with the hotel in advance that good wifi is consistently maintainable will have less headaches with connections. There are a couple of options for workarounds. Consider investing in a portable wifi solution, or keep a couple of good working devices available for scorers to borrow if a table gets stuck.

February 2022 saw a welcome return to Llandudno for 48 players who had been on a playing face to face hiatus for two years.

Players were invited to a weekend of bridge and good food in a warm ambiance of camaraderie and competitive bridge play.

Friday night saw the return to the established bridge format – dinner then a session of bridge and drinks in the hotel bar. Saturday there was bridge play in the afternoon and again in the evening after dinner. On Sunday players enjoyed a two-session teams tournament.

Sarah Amos and Rachel Oliver hosted and supplied the equipment and boards. None of the participants had used mobile app scoring previously so players were asked to bring their devices in the event joining instructions. The event organiser Sarah Amos and Rachel Oliver had been in virtual communication with the trainers in the IBEx team in the lead up to the event. Neither had used IBEScore prior to the weekend, but a desire to give a COVID safe service to their players, and a strong desire to leave dated technology they hadn’t been used for more than two year, gave them the impetus to give it a try.

After training and with the IBEx team in support throughout the weekend, both were extremely pleased they did!

The post event feedback was extremely favourable, so much so that 2023 is already in the hotel’s diary. Perhaps LLandudno will see more socially competitive players visit these Welsh shores in 2023. For details please contact IBEScore asking to be put in touch with Sarah Amos.

DEALS: Deals were generated at time of dealing, stored in Dropbox and uploaded to the app at the start of each session via the GAME CODE browser service.

OTHER EQUIPMENT ON-SITE: Printer and 2 display screens, 1 x dealing machine. The printer was not used. The display screens were setup to access a web browser to view IBEScore Spectate Mode as a traditional nice to have feature after play finished. The app was used to review travellers at the plenary session.

The barometer style of this event meant IBEScore was able to simulate for players an online style of play with regards to seeing what everyone else had done with the cards at the end of each round.

The biggest upside was that players could peruse their devices, or chat outside with current information. Just by refreshing their phones players could tell when the round was completed.

Which was really helpful in getting players back to the table on time! Well we tried!

Players assembled at the invite of playing world class international Jason Hackett at a privately owned and operated club in the heart of Madrid in the summer of 2020 to play bridge, drink and celebrate all that is fabulous about Spain.

Jason’s directives were clear – I want everyone to play a couple of the same boards each round against as many other people as possible. And I want it to be easy. They may drink a bit so you have to help them with where to move to. Oh yes, and the numbers will only be dependent on who actually flies in on the day. We’re expecting players from the USA, Australia and China as well as European players.

The team who now form the IBEx group of directors set about creating a way for players to quickly and easily identify where to start each session and what to do for each of the 15 rounds in each session.

THE CHALLENGE: Bridgemates would only instruct one player from each side, so a new solution was called for. The club scoring software Magic Contest, and EBUScore could only generate a repeating players movement.

THE SOLUTION: A range of movements catering for between 72 and 88 players were manually created by the IBEx (to become in 2020) team, then uploaded as a csv file to the app. Two hours before the game, we were fairly confident who had arrived and checked into their hotels, so with one hour to game time, players were emailed a link to download the App. This told players where to sit and how to move. Because the technology was new and some players did not come prepared for smart phone scoring, EBUScore was also used and a bridgemate table score was also entered.

Behind the scenes, the developer, back in London, England and the two IBEx (to become in 2020) directors on-site were entering the scores for players who did not using their own devices, by watching the bridgemate travellers, using exactly the same process as entering form paper scored games).

At the end of each session the game was uploaded to the results website, and locked ready to carry on play the next day.

This gave the players all the information they needed via their own phones, ipads or tablets, to know where they needed to be at start time before they had entered the building and the quickly take their seats at game time. This was especially important at this event – because any spare time was spent chatting about played hands or refilling drinks at the bar!

This was a pre-pandemic event where 32 players met across the table at the Young Chelsea venue in London to compete for the Institute of Civil Engineers 1st Swiss Pairs.

The organiser was looking to give his players some great bridge under the auspices of Institute of Engineers, London.

The tournament was a Swiss Pairs where pairs would meet six opponents during the course of the day, but would score each board matchpointed against the field and converted to VPs. Each next round opponent was determined by performance in the 6 boards just played.

IBEScore’s forerunner BriAn was used. The director supplied a number of devices and one was set to remain at each table. Players were able to enter scores, just as they would on bridgemate or similar scoring calculator. When all the scores for a round had been entered, the director clicked a button on their device, and as players refreshed their devices, they were able to view their next round seating assignments.

Cost: £25.00 using Silver Success single use for a month plan + experienced TD at the venue

Looking for ways to bring players back to holding cards to play bridge?

Or simply ready to get out in the world again for something different?

If so, this article might give you inspiration to try a cafe bridge day/evening out event.

We assure you the scoring side is EASY and quick with IBEScore.

The concept of café bridge is not new. Indeed we spoke to a director in Madeira who played pub bridge at the 2000 World Championships in Maastricht! Back then it was all paper and runners – Hans Van Staveren is the expert on that.

Pre-pandemic interest in the social aspects of competitive bridge saw a fresh surge in popularity in England.

Now IBEScore makes the concept simple and quite ingenious – it’s truly safe. Armed with your own bidding box and smart phone everyone can be ready to play! – And more pleasingly, the execution is infinitely more simple than one might fear.

64 players, playing in 4 restaurants for 6 hours. An hour in each restaurant, stopping for an hour for lunch in the middle before moving to the next restaurant. Finishing with drinks and prizes at one of the venues.

No director was needed. Newcomers and experienced players alike could all read their movement instructions on their phones. The boards remained at each table.

Registration in the morning consisted of a welcome coffee, setting up devices and checking names and pair numbers assignments. The registration fee included a 3 course lunch, 24 boards and a donation to charity.

Players used their own smartphones (iPads/tablets) to score. All they needed to do was download the free App. The IBEScore service is a chargeable cloud platform, virtually supported by bridge playing scoring experts.

Aside from spare smartphones, the only equipment needed were bidding boxes, cloths and two sets of 24 boards. That’s it.

Flyers on the door helped promote bridge to passers-by. And the local paper thereby bringing bridge to the attention of city residents in a new way.

ORGANISERS
“With everything setup in advance we too were able to relax and play on the day as well. We were delighted with the feedback from our day. And plan to do it again.
We might hold a taster day along similar lines for people who have never tried bridge. And hopefully some will take up lessons with one of the many teachers we have in our county.”

Cost: £45.00 using Virtual Gold single use for a month plan

Player Mode Getting into a Game This video describes how to go to the Google play store and download IBEScore. Iphone and Ipad users please do the same thing except look for the Apple Store application on your device. Then…

How IBEScore App interacts with phone calls and the BACK button on a device.

Player Mode Getting into a Game This video describes how to go to the play store and download IBEScore. Then orients a player into the Reception Area of a game using the session GAME CODE. Setting up My Device for… 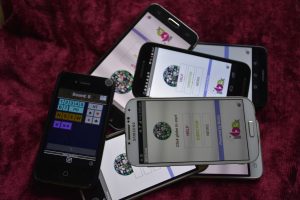